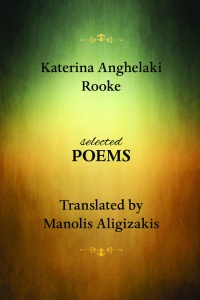 ‘Her poetry, explicitly erotic and passionate, defines her sensual relationship with the world, such a poet of passion she is, though over time Katerina Anghelaki Rooke became more thoughtful, paying attention to memory and to the chthonian and heavenly sense of a world that never loses its primeval powers. Equally dedicated is her intensity when she deals with her place of birth with its fluidity and music that transcend her poetry thus making it timeless and eternal; Katerina’s poetry remains eternally dedicated to a natural element as well as to the beauty and the pain life creates, the committee decided unanimously when they awarded her with the highest prize of the Hellenic Letters.

Emmanuel Aligizakis, (Manolis) is a Cretan-Canadian poet and author. He was recently appointed an honorary instructor and fellow of the International Arts Academy, and awarded a Master’s for the Arts in Literature. He emigrated to Vancouver in 1973, where he worked as an iron worker, train labourer, taxi driver, and stock broker, and studied English Literature at Simon Fraser University. His articles, poems and short stories in both Greek and English have appeared in various magazines and newspapers in Canada, United States, Sweden, Hungary, Slovakia, Romania, Australia, Jordan, Serbia and Greece. His poetry has been translated into Spanish, Romanian, Swedish, German, Hungarian, Ukrainian, French, Portuguese, Arabic, Turkish, Serbian, Russian, Italian, Chinese, Japanese, languages and has been published in book form or in magazines in various countries.
He now lives in White Rock, where he spends his time writing, gardening, traveling, and heading Libros Libertad, an unorthodox and independent publishing company which he founded in 2006 with the mission of publishing literary books.
His translation George Seferis: Collected Poems was shortlisted for the Greek National Literary Awards, the highest literary recognition of Greece. In September 2017 he was awarded the First Poetry Prize of the Mihai Eminescu International Poetry Festival, in Craiova, Romania.