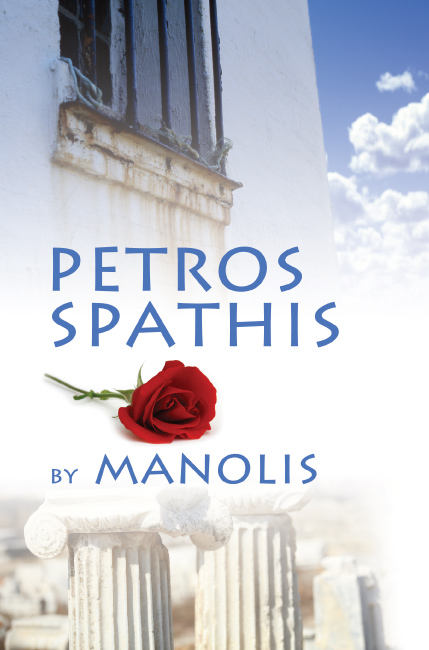 ‘Manolis writes a gripping story set in a country seeped in history, in an era when Greece was governed by a military tyranny… The story line holds the reader from a promising start to a disturbing finish.’

Greece, the birthplace of democracy, is in one of its darkest periods. A right wing government known as the Regime of Colonels is terrorizing the Greek populace. Those who dissent from government policy or action go to prison – or simply disappear.

Life has been good to Petros Spathis: he has just finished his BA in Economics from the University of Athens with the highest marks in his class, and he is offered a professorship on the condition that he acquire a Master’s degree from a North American university. He is also handsome and charming and catches the hearts of many women, including an Italian Canadian girl, Samantha, and a Greek beauty, Madga. Despite a job offer by the University of British Columbia and Samantha’s pleading that he stay in Canada after receiving his MBA, he goes back to serve his home country.

However, being an idealist, Spathis is compelled to help his students in their struggle for freedom of speech and speaks his mind about what the government should do in front of the formidable school trustee, Colonel Prodromos Alvarezos. He is dragged from his office by police and imprisoned.

Petros Spathis’s close friend, Colonel Stathis Vikas, uses all his power to pressure the government to release Spathis; his students stage demonstrations for his freedom, and Samantha exerts her Canadian influence to rescue him. Will Spathis be freed? Or will he be buried in an unmarked grave by the junta?

“In this meditation on the nature of liberty and independent thought, Manolis explores the misuse of political power and the perishability of freedom. The story’s passions and relationships rage across half the world. A disturbing novel of great beauty, wrought with the author’s sensitivity and strength, Petros Spathis is a Darkness At Noon for our time.”

“The description given by Erasmus of Thomas More as an “Omnium horarum homo” inspired Robert Bolt to choose the title A Man for all Seasons for his play written in the 1950s about the life of More. The play portrayed More as an unbendable man founded on sound principles; a stark parallel can be drawn between that image of More and Petros Spathis who refuses to surrender his integrity by signing the “paper of confession” and thus pays the ultimate price for his beliefs. Petros Spathis is a man for all seasons and sadly all such men end up the same way.”

On the celestial blue wad of uncertain inertia, shapes of water are described by continents. The continents possess invisible lines, separating and protecting nations from the unknown. These are called borders and function as seawalls against meaninglessness. In the capital city of one nation – whose border is marine, except for its interior portions that are seldom acknowledged – is a building. Inside the building, which seems made entirely of corridors without destinations – yet with no Minoan puzzle, no labyrinth in mind at its construction – is a small cell, number 322. In the room, so without character, there is one small, barred window to describe a man. In the man are a blue Mediterranean of memory and his imaginary port through which he summons his island: sailing, skewering the centuries at the speed of a wild dove, jagged face sunward, savaging back the battle of glaucous breakers, waking behind a spoor of black blood.

The image intensifies in resolution; a sword-blade geography, an oblique holiness fuelled by ferocity.

It is the slopping of the beasts, or as it is known more formally, the distribution of the evening meal to the prisoners; to Petros Spathis’ surprise and pleasure, Vikas’ son is on duty, standing there in the doorway of his cell with his tray. The son whispers that things outside the prison are going well, very well, and his father, Colonel Vikas, will come and visit as soon as he can contrive an unsuspicious excuse. With that modicum of lift, Petros Spathis begins the adventure of the evening meal with as much appetite as he can muster.