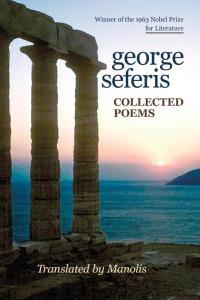 In 1963, George Seferis (born George Seferiadis) became the
first Greek poet to receive a Nobel Prize for literature.
In my effort to present an English translation of the work of
this great poet, I shall try to be simple and to the point, offering
a plain view of work considered by many readers and book critics
difficult to understand. Although sometimes hard to follow,
I believe Seferis to be in sync with today’s harsh automation and
self-centeredness, as if present 41 years after his death.
George Seferis lived through the destruction and misery of
the 1922 war and resulting migration of the Greek population
from Asia Minor to Mainland Greece. He endured the suffering
of the Second World War and years of German occupation as well
as the devastating civil war and the difficult years that followed,
while Greece tried to find her footing on the world stage. Seferis
also lived during the strange years of military dictatorship, which
lasted from 1967 until 1974. He died in 1971 while his homeland
was still under the heavy boot of the colonels.
I shall approach this poet from a point of similarity, in that
we have both spent the greater part of our lives away from our
homeland and that we see and feel the bond with Greece differently
than those who have remained. People living away from
their homeland live with the wrath of nostalgia, a word derived
from two Greek words, ‘nostos’ (νόστος) and ‘algos’ (άλγος). There
are no equivalent words in the English language. The first word,
‘nostos’, underscores the longing one has for his homeland and the
second word, ‘algos’, is associated with the painful ache a person
feels when return is impossible. For every émigré, this ‘severe
homesickness’ remains catalyst for the manner in which he observes
his place of birth and the way in which he integrates into
his present home. I have lived under that influence, as did George
Seferis, due to his diplomatic career.
Living in a foreign country, one undoubtedly retains countless
images from childhood; images that guide while providing resolve
and hope, patience, certain happiness within oneself, as well as
strength drawn from heritage, from myths and from symbols of
the motherland. Such a person also develops a reverence for the
land he has left behind. As a result, everything he creates in reference
to the old country is adorned with a certain beauty emanating
from the heart and a deep sense of belonging, unparalleled by
any other bond a man might develop throughout life. This unique
bond and deep sense of belonging is evident throughout Seferis’
work and it will be discussed in detail when we come to the poem
‘The Return of the Émigré’.
George Seferis lived much of his life away from his beloved
Vourla, the small village near Smyrna, Asia Minor, where he was
born. His career in the diplomatic field took him to various countries
around the globe. Like any other Greek who lives the bittersweet
emotion of nostalgia, as I too have lived for 38 years, he
sees his motherland through a different lens than do those who
have remained. Emigrés always retain an unquestionable glamour
about their homeland, especially Greeks. It is said that Greeks
living away from home are far more Greek than those living in
Greece.
That of course has to do with the influence the foreign country
has on the immigrant as he struggles to assimilate. While attempting
to establish a firm footing and new identity, he gives
up his original ways and customs, adopting new ones, yet always
reminiscent of the homeland to which he hopes one day to return.
Sadly, it is a battle destined to defeat. Nevertheless the émigré
never stops dreaming of the return trip.
George Seferis rides an emotional roller coaster as he struggles
to maintain a balance between past and present, a balance evident
in his poem ‘The King of Assini’, when he finally admits that every
effort on his part turns futile and the past cannot simply assimilate
with the new, because, ‘and the poet a void’.

On the secluded seashore
white like a dove
we thirsted at noon;
but the water was brackish.
On the golden sand
we wrote her name;
when the sea breeze blew
the writing vanished.
With what heart, with what spirit
what desire and what passion
we led our life; what a mistake!
so we changed it.

The angel,
we had waited for him for three years, concentrated
closely examining
the pines, the seashore, the stars.
Joining the blade of the plough or the ships keel
we searched to discover once more the first sperm,
so that the ancient drama might recommence.
We went back to our homes broken hearted
with incapable limbs, with mouths ravaged
by the taste of rust and salinity.
When we woke, we traveled to the north, strangers
driven into the mist by the perfect wings
of swans that wounded us.
During winter nights the strong eastern wind
maddened us
in the summers we got lost in the agony of day
that couldn’t die.
We brought back
these petroglyphs of a humble art.